What our Veganish Family Eats in a Day

“What is veganish?” People ask.

“You ate a vegan burger. With cheese on it.”

I did, sir. And I’ll pay for it later, promise. Clear eyes, full heart.

I maintain, as I did in 15 Ways To Respond When Your Family’s Veganism Comes Up At Thanksgiving, that the way we eat is simply that, a way to eat. Not an identity. I don’t want to get into a debate about theology and sentient lives. I won’t throw paint if you wear fur, screaming about the patriarchy. I’m not really doing this for the animals and I abhor PETA.

There are reasons that we (I) choose to eat the way we do. They are depressing and scary, involving the overall disgusting and inefficient nature of agribusiness, the contamination of the general animal protein supply, and the detrimental, cancer-y nature of processed food. It is what it is. But neither of us are interested in a lecture.

Inquiring minds continue to ask (as I would), so here’s what we eat in a day, and why. 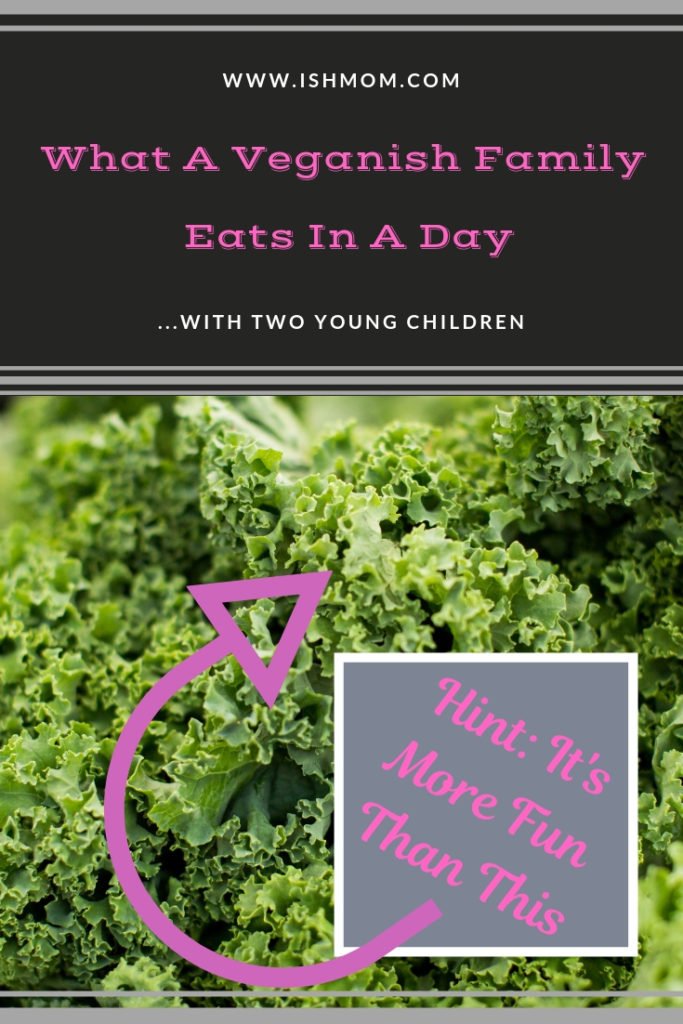 I like making a large batch of oatmeal at the beginning of the week to last a few days. But not this week; I haven’t been able to sleep. It’s weird and I think it’s hormones. Josh has been getting up with the boys and I enter smeary-eyed around 7:45. So how do I even  know? I don’t. Josh says they get:

You know how easy a banana is? Just sitting in it’s own pouch, cut up in 30 seconds, no heating required. And then, potassium. Toast is practically cooking, using heat to change the breads’ form and all. Applesauce makes Big A poop and regular pooping helps with…everything. It’s cray how much more he’ll act out, have low frustration tolerance and impulse control, etc, when he’s not pooping. We go through so much applesauce. Fiber and pectin are just a bonus at this point.

Cottage cheese is easy to serve. Both boys eat cheese as we don’t want to make them lactose intolerant. (We also eat a little butter, mostly because margarine is udderly horrifying.)

The A Team may not want to eat veganish when they’re older. We use plant based milk (dairy milk is problematic and does not in fact build strong bones), but I like the protein and vitamin B12 benefits of serving cheese several times a week.

The smoothie sounds frou-frou but it’s just frozen fruit; it takes less than five minutes to assemble and blend. Then Big A can get the vitamin C, calcium, protein, blah blah blah, without making him eat a salad or something. And oatmeal without having to make oatmeal.

He’s gotta eat, right? I don’t understand why he doesn’t like breakfast and you should tell me why and your tips in the comments below.

I intermittent fast, a practice I’ve done for four years (when not pregnant). It’s something I definitely eased into and requires research. It works for me. I don’t like taking the time to prepare breakfast for myself in the morning. But if you wanna take me to IHOP at 8 AM I won’t refuse.

Big A seems to be the only one who requires a mid-morning snack. He loves his small delicious sack of bowel regularity.

I like to break my fast with lots of nutrients. In warmer months I’ll eat a giant salad of greens, heavy on the beans, hemp seeds, and hummus. Soup is just a more palatable, comfortable way of eating salad in the winter. I dip the buttered bread in it cuz that’s delicious.

Lemon water is ridiculously good for you, but I’m not trying to fool anybody, like, “put some lemons in your water if you don’t like the flavor!” No. It tastes like water with lemons in it.

Diet Mountain Dew is not good for you.

Lunch Toast is a little more complicated, but nothing crazy. Lunch Toast is a vehicle for tastes, textures, and nutrients. Avocado is on deck today due to its’ healthy fat content. I sprinkled the superfood hemp seeds (and salt, pepper, and nutritional yeast) atop for texture.

Applesauce for the pooping.

As we don’t rely on animal proteins, consuming beans is important. Period. They don’t always go over, but I always serve them. I make a big batch in my Instant Pot. A bag of dried pinto beans is cheap and the longest part of the process is the soaking.

Today was a day in which none of the food went over. I don’t know why. If you do, let me know in the comments below.

Here’s the thing, though. Big A cleared his plate. He screamed his freaking face off for eight minutes, but he cleaned his plate.

I never reacted. No matter how badly I wanted to say, “But you’ve had this a million times, in fact, you had this yesterday,” “Do you want crackers?” “Peanut butter toast? Did you not want the avocado?” or whatever, I didn’t. I fed and talked to Little A, fetched stuff I forgot from the kitchen, even looked at my phone. Anything to keep my tongue still and my face neutral.

Nine times out of ten, this works.

This does not a complete diet make, Little A. And for gods’ sake, since he learned how to sign “cheese,” it’s over. Sometimes I can get half a (small) bowl in. Most of the time it’s 2-4 bites before he’s craning his neck away, little palms rubbing together. And I dunno if I trust those veggie crunchies BUT HE LOVES THEM.

Little A will be a year old next month. I weaned Big A around a year old, but if Little A is relying veggie crunchies to survive then I wonder how realistic that is. Damnit. Tell me what to do.

I need those nutrients. And it’s an easy way to get in a 500 calorie snack (consistently eating a low calorie diet, desirous of losing weight or not, is, at best, ineffectual, at worst, disastrous).

But, seriously, how am I going to wean him? Remember how Big A wouldn’t scream at this age while I did the dishes? I do.

There are specific nutrients we all, but especially developing humans, need. Limiting animal protein can be a hurdle to delivering these nutrients. But, for the depressing reasons I’ve alluded to, it’s a hurdle that’s important for my family to get over. A hurdle that is surpassable, mostly, with planning. We very specifically plan our weekly menus with an eye on nutrition consumption and frugality.

So there’s no wiggle room, sons. I can’t afford to be giving you cheese and crunchies all day, Little A. I just can’t. My eye is on combining plant proteins to form as complete of an amino chain as possible.

But I also can’t get too twitted out about it.

We serve what we serve, whether it be Brussels sprouts and quinoa, tofu, roasted vegetables, pancakes, potato carrot bake, etc. Little A gets his share cut in little pieces. We don’t ask if they like it or react if they seem to not like the meal. If, after thirty minutes, no food has been eaten, they can have bread, applesauce, sliced carrot pieces, something less appealing. This kind of food is presented (and removed when gone) without remark. Food is offered again at breakfast.

Sometimes it’s a loooong thirty minutes. More often than not, it’s a taxing 5-15 minutes and dinner is eventually eaten.

These techniques save our sanity and sanity is an important requirement for eating veganish. The boys seem more receptive to trying new foods. They may initially refuse, but with no reaction and steady change, there’s not much fun to it.

I compromise with sneakiness, like putting spinach and oatmeal in smoothies.

Late At Night When They Go To Sleep

Some days are better than others. Our system isn’t perfect: things are smooth enough with Big A and perplexing with Little A (seriously, give me your tips in the comments below), unless it’s homemade or the nutso expensive Ezekiel brand, Big A eating bread three times a day is problematic (don’t let whole grain claims fool ya, commercial bread is sugar), and I don’t like our dependence on processed infant snacks.

I can put away a lot of Hershey’s Kisses.

But we try. We plan. We commit time. Because nutrition is important. It’s not a joke, or a cliche, or solely a means to change the way we look. It’s undeserving of a flippant shrug.

With research, a little time management/planning, and batch cooking eating veganish is easier than I ever imagined. I would love to explain these techniques in more detail, with more specific steps and timelines. Printables? A Clean Up For Summer meal plan/scheduler or some such? Message me, follow me on Facebook, or leave a comment below and tell me what you’d want from something like that.

The Ish Mom Review: City of Girls by Elizabeth Gilbert