Fleishman Is in Trouble by Taffy Brodesser-Akner: Book Review

Fleishman Is in Trouble is a novel about marriage that opens with divorce. Toby Fleishman divorced a harridan. A social climbing, shallow, money-obsessed, whip yielding succubus. During fights, Rachel Fleishman “went for Toby’s masculinity like it was an artery.” As an unattached doctor at a major New York City hospital, the world (specifically the dating world), is his oyster. There are scores of women, willing to… comfort him after such an ordeal. And Toby is eager to be comforted. Except, Rachel drops off their two kids to attend a yoga retreat. And she doesn’t come back.

Toby’s world is turned upside down as a put-upon, suddenly single parent. As the narrative unfolds, we realize that Rachel’s life has been upside down for years. Is Rachel truly the raging bitch on wheels that Toby describes? Or is Toby Fleishman in trouble of his own making?

Marriage as a Character

Fleishman Is in Trouble is not the first novel to treat marriage as a character. And it’s not the first novel to highlight the disillusionment of marriage (see Revolutionary Road by Richard Yates, The Awakening by Kate Chopin). Or matrimonial infidelity, difficulty, or loss (see An American Marriage by Tayari Jones, Dept. of Speculation by Jenny Offill, Rabbit Run by John Updike, and The Amateur Marriage by Anne Tyler). Nor is it the first to provide a delicious marital twist (see Gone Girl by Gillian Flynn and Fates and Furies by Lauren Groff).

But, Fleishman Is in Trouble covers all of these themes. With sly wit and devastating observations, Brodesser-Akner convinces the reader to side with Toby. As the story unfolds (and Toby’s coping skills implode), we realize what a complex character their marriage is. And that Rachel is not the villain. She’s simply another protagonist.

Fleishman Is in Trouble

Toby is feeling more settled after the immediate aftermath of his failed marriage. He’s planning to spend the summer licking his wounds, tucked away in his sub-par, Upper East Side apartment. He’s dove headfirst into online dating and reconnected with his two best friends from college. Startling late, one of these long-lost friends is revealed as the narrator. Libby lends her own disaffected voice and perspective to describe Fleishman’s woes.

The arrival of nine-year-old Solly and 11-year-old Hannah derail Toby’s Hot Divorced Dad train. Before, Toby was comfortably smug in his role as Primary Parent. But, with the lack of a convenient adversary (Rachel) and a regular nanny (Mona) to make him feel holier-than-thou and arrange childcare, he begins to flounder.

Is Toby as good at his job as he thought he was? As selfless, smart, and “above-it-all” as he previously thought? Was he truly an unwitting accomplice in the demise of his marriage?

Fleishman Is Kind of a Jerk

Nope. Fleishman is not the hero he thought he was. Nor is he the sole victim of his marriage. He’s mostly just a self-righteous prick. For someone who spends paragraphs skewering his ex-wife and her society friends for being vain, shallow, and money/status hungry, he sure is obsessed with his looks (especially his height and the fat content of his food).

Toby often compares his newly single life to a smorgasbord. Let’s just say he isn’t pursuing these women for their big brains and taut personalities. In fact, when he can finally go public with his secret sex buddy, he’s almost immediately turned off by her age spots. And dumps her.

He claims to hate the long hours Rachel worked to bring in a seven-figure salary. He chides the posturing of their comfortably moneyed friends. But he sure enjoys his house in the Hamptons. And when Rachel abandons the children, he gets really nervous that maybe that sweet, sweet child support money won’t show up in his account.

Almost simultaneously, Toby and Libby realize that Toby isn’t all he’s cracked up to be. But Fleishman Is in Trouble takes the unusual perspective (especially for a marriage novel) that ex-spouses aren’t the only ones unmoored. This novel posits that Toby, Rachel, and all the Gen-Xers in the novel are floundering. Taffy presents this fact not as a character flaw, but a kind of post-millennial mid-life crisis. Those previously mentioned moneyed friends? Libby the narrator? Even swinging bachelor Seth, the third college friend of the trio? They’re all fighting rising tides of emptiness, malaise, and indignation. They thought the future and their late adult lives would be more promising. Back to the Future promised hover boards, damn it!

And the Survey Says…

Turns out, there’s some truth to this. A MetLife study found that only 54% of Gen Xers feel empowered at work. And just 62% feel respected in the workplace. 54% also reported feeling confident about their finances. Overall, Generation X is the least happily employed and most financially stressed generation.

This generation faces unique challenges. Boomers have empty nests and many Millennials don’t yet have children. More than 75% of Gen Xers have children. And nearly half of Gen Xers have a parent over 65 and a child. Many study respondents reported feeling “left out.” The Baby Boomers received attention for years. Then Millennials came up in record numbers, making a lot of noise. Gen Xers felt (and were) pushed to the side. In fact, a CBS graphic of the generations completely left Generation X out (check the hilarious responses to that gaffe here).

Taffy Brodesser-Akner perfectly captures these feelings of stress and panic in the actions and dialogue of her characters. 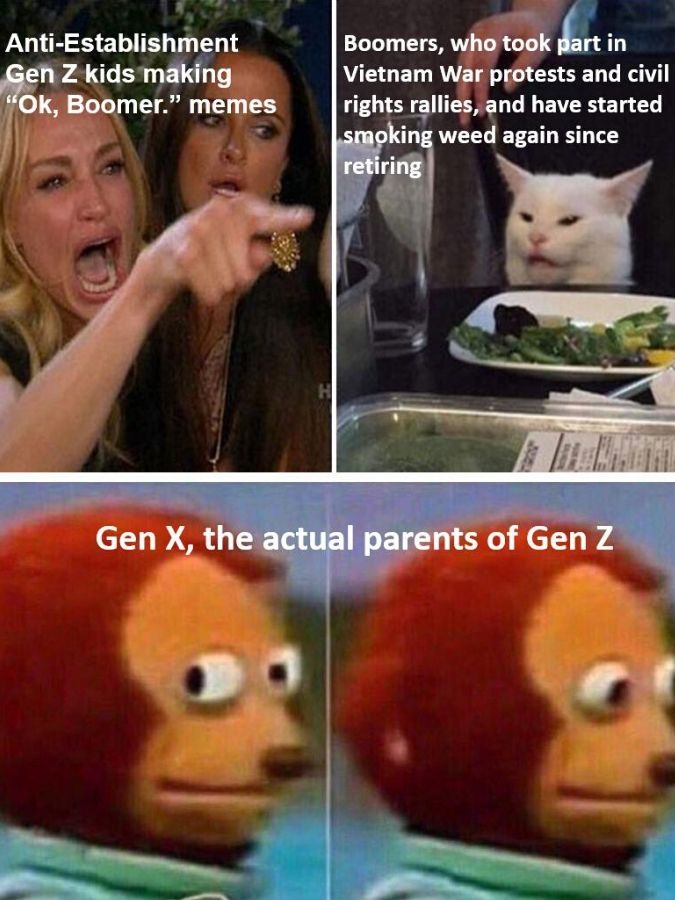 Rachel Fleishman’s ultimate downfall stems from her unrelenting ambition. Her husband, friends, and superiors routinely punish her steely determination and the success that comes with it. Fleishman Is in Trouble is also a manifesto of the difficulty that enterprising, pushy women present for society. Second-wave feminism promised that women could and would have it all. Society continuously fails to deliver.

Both Libby and Rachel face unique work-life balance struggles once they become mothers. Struggles their husbands can’t (or won’t) understand. They are harassed at work and overlooked in their careers. They’re punished or sneered at for succeeding anyway or dropping out of the rat race. Fleishman Is in Trouble takes a cold, hard look at the double-edged sword impaling the women that “have it all.”

Take It From Me

I’m an ambitious woman, and this aspect of the novel resonated. It brought to mind every well-meaning adult that told me ,”Boys don’t like bossy girls.” The abashed looks that can accompany my frankly discussed skills and goals. The guy at CVS who got big mad after I told him not to cut in line in an assertive tone with searing eye contact. I’m telling y’all, ambitious, direct, and confident women can make people uncomfortable. The struggle is real.

What books have you been reading during the COVID-19 quarantine? I’m desperate for suggestions, drop some in the comments. Did you enjoy this book review? Share it!

The Water Cure by Sophie MacIntosh

How to Deal with Trolls on Social Media